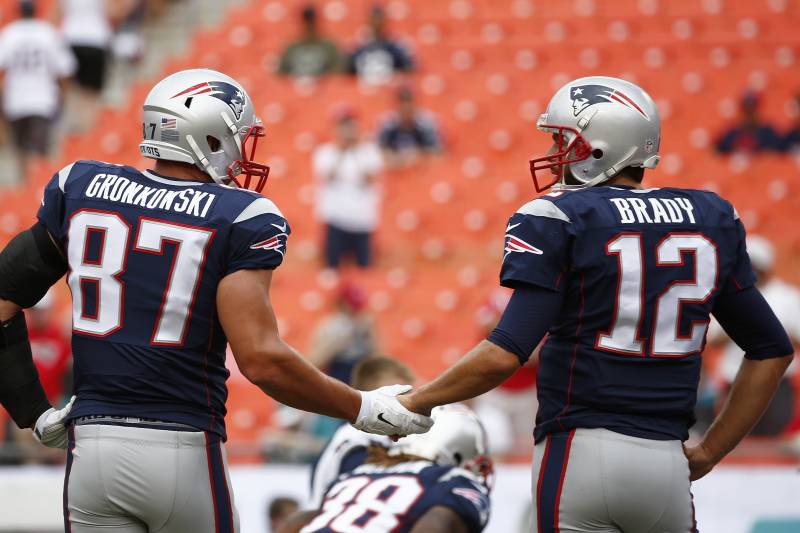 A one-two punch to the gut of New England

A one, two punch to the gut of New England

Lightning strikes twice for the Tampa Bay Buccaneers – Tom Brady and now Rob Gronkowski are back together again; is the Super Bowl’s next stop Tampa Bay? Only time will tell.

Somehow, deep down, you knew it was going to happen – you knew that like Butch Cassidy and the Sundance Kid, like Abbott and Costello, or even Batman and Robin, the real dynamic duo will be Brady and Gronk; and you knew that somehow and in some way they were going to ride together again.

It happened, and for any New England Patriot fan the horror is that it is not going to be in New England. It happened in the south, no, not Washington; more south; no, not Atlanta, further south; and no, not in Jacksonville; even more south, it happened in Tampa Bay. The same team where once their legendary college coach John McKay who was the franchise’s first coach when the team took the field in 1976, was asked by a reporter after another Tampa Bay loss, about his team’s execution his reply, “I’m in favor of it!”. Funny, yes, but also sad; sad that a professional NFL team went to lose every single game that they played that season. As a matter of fact, Tampa Bay went 0-26 before beating the New Orleans Saints 33-17 for the franchise’s first ever win.

Something tells me that they really didn’t research the team that they were going to, but perhaps they did, because the New England Patriots were once being courted by Tampa Bay before 1970 to leave the New England region and settle in Tampa Bay. One big difference is that although the Buccaneers won Super Bowl XXXVII by defeating the Oakland Raiders 48-21, the franchise has been a losing one since day one of their existence. As a matter of fact, from 1983 to 1996 Tampa Bay was the worst professional NFL team ever to take the field. Passing constantly on future Hall of Famers in the draft to get NFL busts. Fast forward to recent seasons, Tampa Bay has been stuck in mediocrity – 6-10, 7-9, and 8-8 records became the norm, and continued bungling by the front office continued to keep the Bucs as the punchline for late night talk hosts. In most of their 44-year history the Buccaneers have known nothing but mediocrity, the lows have always outnumbered the highs.

As every New England Patriots fan is well aware of, after 20 years of nothing but success, the quarterback, the G.O.A.T, the face of the franchise, Tom Brady, opted out of his contract. He wanted a longer commitment from Bob Kraft and Bill Belichick, which they were not going to give. They also were not going to give Tom any weapons either. Everyone who is a Patriots fan knew by the final gun of the 2019-20 season that the New England Patriots were in a rebuilding mode, by the personnel that were put on the field around Brady, and it was obvious that the Patriots were moving on from the most popular professional athlete that New England has seen since Larry Bird, Bobby Orr even Ted Williams.

For the New England Patriots fan, gone were the good ole days and a journey into the unknown was about to begin. As for the G.O.A.T. it was time to see where he was going to take his talents. Well it was not to South Beach like Lebron James did, although speculation had Brady landing in Miami. It was in fact a little north and a little bit west of Miami. Tampa Bay provided a team that believed they were one player away from being serious contenders for the Super Bowl. Although it was hard to imagine that they had Brady in their sights all along. But Brady they landed indeed, and suddenly Tampa Bay Buccaneers became mentioned in every conversation on all the sports networks as one of the teams to watch in 2021.

It was a shock when New England’s beloved Quarterback Tom Brady left and then signed with Tampa Bay. Now to make matters worse for the Patriot faithful, Tom’s side kick Rob Gronkowski and perhaps one of Brady’s greatest weapon that he ever had, after taking the 2019-20 season off or “retired” not only un-retired but he did it only to have the Patriots trade him to Tampa Bay for a draft choice and a player. Advantage Tampa Bay! Or is it?

The whole development shocked Patriots Nation, but did it? Really? Patriots decided a while ago to move on from Gronk but with his salary that is still on the Patriots books. The Patriots had to get more room under the cap in order to go onto re-establishing themselves as the NFL’s model franchise. Frankly, Gronkowski has been toying with the idea of returning to play football for some time now. So, it was only a matter of time before the 30-year-old All Pro tight end would return to the game. The surprise was the request to be traded to Tampa Bay to rejoin Brady. Gronkowski could have gone to any franchise and turn them around immediately. It now appears that NFL players have learned by watching what the NBA players have been doing for quite some time, joining their buddies to help form a super team. Who can forget Lebron to Miami, or Lebron back to Cleveland and then Lebron to Los Angeles? Time will tell if that strategy will work in the NFL.

But for now, Tampa Bay is risking being known as the Patriots of the south, which by all accounts is not the worst thing in the world. But there are questions that the Buccaneers must answer, like is the offensive line good enough to protect a 43-year-old stationary quarterback with limited running ability. Another is, can they handle the fun loving wild Gronk, who without Bill Belichick around could get out of control. Can Tampa Bay take Gronk being Gronk? And how long before Julian Edelman heads to Tampa Bay? That is not out of the realm of possibility. Edelman has always been one of Brady’s favorite targets and part of his entourage. If Gronk was Brady’s yin, Edelman is certainly Brady’s yang. But Edelman is not in Tampa Bay – YET.

Tampa Bay has a lot on the line, with their investment in grabbing two of the NFL’s major stars of the modern era, the time to win is now, they made the investment, their salary cap has taken a hit and they could possibly make a couple of moves to shore up some of their weaknesses. The Buccaneers defense was good last season, but can they improve enough to win a Super Bowl Championship? That will remain to be seen if they pick up that one or two players than can make a difference on the defense like they did on the offense. The old saying goes is that offense is for show and defense is for dough!

Yes, Tampa Bay is going to be known as New England of the South, but they now have our Tommy and our Gronk and perhaps who know who will end up there? One thing for certain is that the Buccaneers went all in and they are banking on the dynamic duo to get them to the finish line.