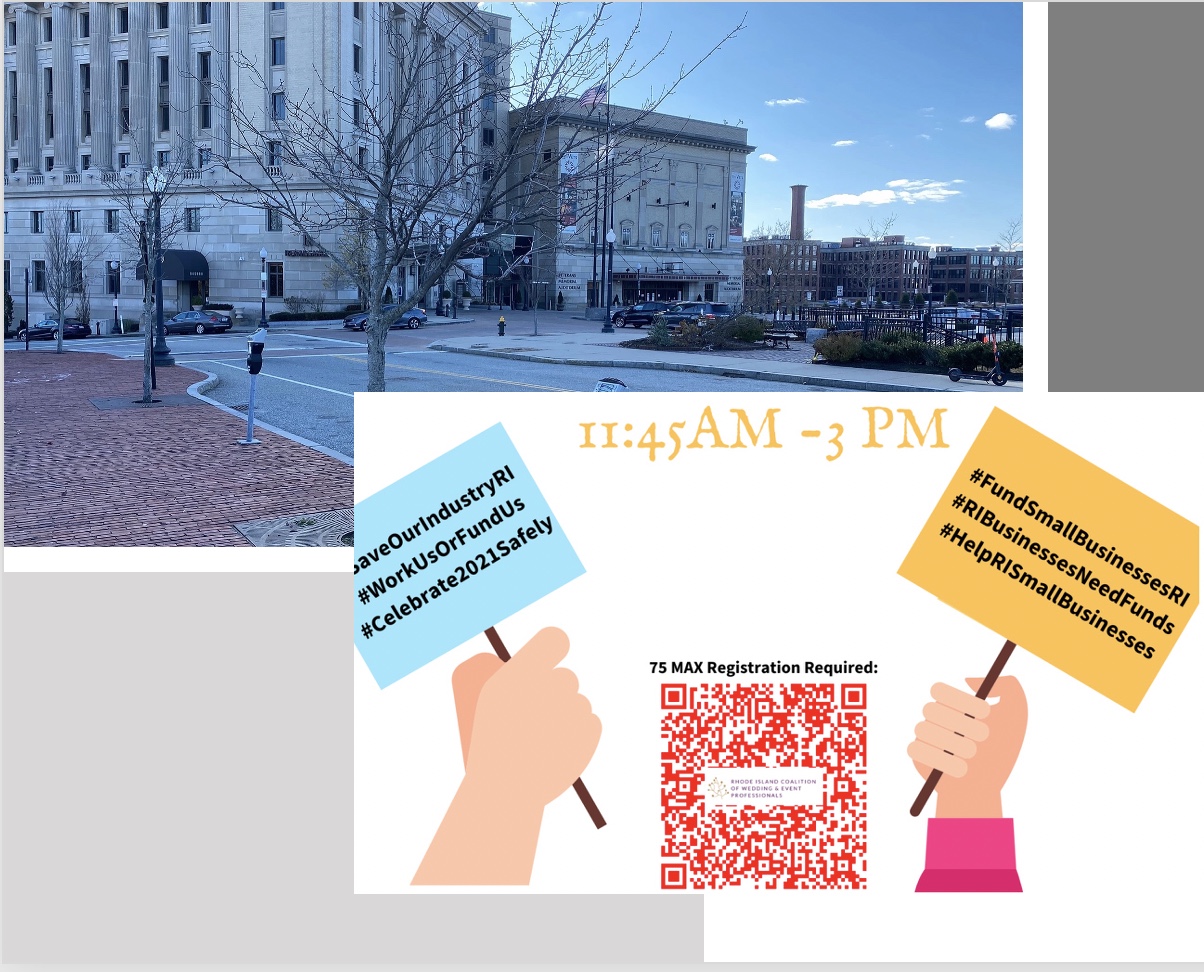 Photo: A rally is planned today at the Veterans Auditorium during the Governor’s press conference TODAY at 1pm – Rally is from 11:45 to 3pm. Details below from the RI Coalition of Wedding and Event Professionals.

2,000 signatures have been gathered on a petition by the group on looser restrictions.

Head of Medical Services for RI Dept. of Corrections will leave at the end of the week – with over 900 ACI prisoners testing positive. The Public Defender’s filed an emergency petition with the Supreme Court requesting that it exercise its power during the public health crisis to modify bail guidelines to temporarily require that judges set personal recognizance bail, except in extraordinary circumstances that are stated for the record.  The DOC facilities have a total of over 900 positive cases.

Rhode Island ranked among the top 10 nationally in new per capita coronavirus cases, according to The New York Times, with no other New England state or New York in the top half of states. RI’s older population, those living in nursing homes, and our density contribute – as the 9th “oldest state” in the US.

Dr. Fine said we may have 60,000 doses for Rhode Island. 40% of people may have small side effects – tiredness, fever, headache, similar to reaction to regular flu shots, though perhaps a little more. 2 days out of work after the shot would be recommended. We will have to phase in for healthcare workers.

An outbreak at an assisted living facility in Lincoln – Atria – has 16 out of 21 residents and 6 staff positive.

89% of ACI inmates at maximum security have tested positive – 316 of 354 inmates – per RI Dept. of Corrections.

Lifespan is reporting a $21Million profit, and credits CARES dollars. Last year they had a $35M loss. This year they received $45M in federal assistance and $25M from the local RI Partnership of hospitals.

Crossroads has opened a new temporary shelter for 30 homeless individuals on Pine Street in Providence.

Pawtucket Library is closed to the public during the state’s pause.

Two gyms in RI have remained open, challenging the state’s shutdown order.  Maxx Fitness in Lincoln and Warren. They have 50 employees and say they could not exist if they suffered another closedown. Both gyms were fined and told to close immediately. The owner said they will not comply.

The Scandinavian Home in Providence was fined over $47K from the Centers for Medicare and Medicaid Services (CMS), which has fined 218 nursing homes more than $17.6 million for the most serious infection control violations that put residents in “immediate jeopardy,” conditions CMS believes are likely to seriously injure or kill them. Notably, the Scandinavian Home is among the lowest for COVID19 cases and deaths.

“As {RI} hospitals fill up, the bar for admission is rising. A patient who might have been admitted 4 weeks ago may get sent home now.” – according to Dr. Jha of Brown University

The Providence City Council sent a letter to the Governor from its members voicing their strong disapproval of the administration’s aid-cutting actions so far, including a 50% cut to the city’s anticipated $5,155,694 in ‘distressed’ communities aid. They asked the governor to reverse course. This action follows the lawsuit followed by Mayor Fung on behalf of Cranston’s not having received their PILOT funds.

India Restaurant in Providence is offering 100 free meals each day in December to those struggling this holiday season – between 2-5pm, chicken/vegan.

Ambulance companies have said they cannot continue without funds.

Monday is the last day for the program that has allowed restaurants in Boston to use sidewalks and public streets for outdoor dining.

Gurney’s Ice Skating Rink in Newport will not open this year.

Last week, we launched a new texting system to let people know that their test results are available at portal.ri.gov/results. Going forward, if you provide your cell phone number when you sign up to get tested, you’ll receive a text message as soon as your results are available on the portal.

Advisory Committee on Immunization Practices, an outside group of medical experts that advises the CDC, met to vote on which groups are expected to receive the first doses of one of the vaccines. Governors would have leeway within these groups. They said, “When a COVID-19 vaccine is authorized by FDA and recommended by ACIP, health care personnel and residents of long term care facilities should be offered vaccinations in the initial phase of the COVID-19 vaccination program.”  This would be people who work in:

800,000 vaccines will be delivered by Pfizer to England next week for immediate use

New quarantine recommendations for those who have had contact with someone who is positive (not if you are sick) – is 7-10 days.

76 nuns test positive in a monastery in Germany

CDC has issued new warning to those over 65 – they should not enter anywhere indoors without people wearing masks and get their medications and food delivered.

Presidents Bush and Obama are going to get their vaccines live, on-camera, to try to help people see them as safe.

UK will begin the Pfizer vaccine next week, with those over 80, elderly in homes, then go out in batches by age group – military will insist – stadiums, etc. will act as sites. By January drug stores will serve as sites to innoculate the public. Shots are two, 21 days apart. “This is the beginning of the end of the pandemic,” said UK health officer.

Before February we could lose 450,000 people in the US

New Hampshire State lawmakers bundled up and spread out on an athletic field Wednesday to start their next two-year session.

The owner of Mac’s restaurant in Statan Island was arrested after failing to close his business – resulting in demonstrations over over 1,000 people in the streets.

Russia has already vaccinated 100,000 with their Sputnik V vaccine and will begin broader vaccinations next week.

Brazil is the first country to prioritize a special population – Indigenous populations – in the first group to be vaccinated, including elderly, healthcare workers, etc.

The CDC is urging Americans to avoid all travel to Mexico as that country grapples with rising deaths.

UPS is telling drivers to stop picking up at Walmart, Macy’s, LL Bean, and other big box stores – placing management on surges. Dec. 15th ground deadline for UPS/Fed Ex and the 18th for express. 800 Million packages will be delivered.

A New Orleans “Swingers” Convention has had 41 people test positive.

Salesforce CEO Marc Benioff called the $28 billion move a bet that pandemic-driven changes to work aren’t a temporary blip, but a more permanent shift will be to remote work, with Slack supplanting email as a favored means of business communication

Gov. Mills of Maine is now in quarantine – 20 deaths have happened in Maine

Association of ambulance companies have told the federal government that the industry is in serious financial straits.

NYC public schools will begin to open on Dec. 7.

To see the Rockefeller Christmas Tree in NYC, you have to sign up ahead of time, be in a pod, and stay for 5 minutes, only.

Some research has shown that the virus could have been in the US, and New England, as early as Nov of 2019.

Cambridge-based Moderna is planning to study its COVID-19 vaccine in children between the ages of 12 and 18.

Waltham ended a pedestrian area that was created over the summer to support local businesses and restaurants during the COVID-19 pandemic.

Dr. Fauci said that if he had one thing to recommend to keep safe over this outbreak is to keep our gatherings to those we live with only – the very antithesis, he says, of the holiday season.

Dr. Fauci said it’s “not too late” for people traveling back home after Thanksgiving to help stop the spread of the virus by wearing masks, staying distant from others and avoiding large groups of people.

Free coffee for 1st responders and front line workers all month at Starbucks.

Infection is being driven now by those who are positive, with no symptoms.

Other research – Scientists at the Institute of Cancer Research in London estimated that their work has already been delayed by an average of six months.

Kantaro Biosciences has received Emergency Use Authorization from FDA for COVID-SeroKlir, its semi-quantitative SARS-CoV-2 IgG antibody test kit. Unlike other antibody tests, COVID-SeroKlir determines the presence and precise level of IgG antibodies and has a broad range of applications in the fight against COVID-19. Through a commercial partnership with Bio-Techne Corporation the test kits are being manufactured at scale with a capacity of up to 10 million tests per month and the ability to scale up.

New York Gov. Andrew Cuomo said on Monday that struggling state hospital systems must transfer patients to sites that are not nearing capacity, as rising coronavirus cases and hospitalizations strain medical resources. “If a hospital gets overwhelmed, there will be a state investigation. And if the result of that investigation is they did not distribute the patients, that will be malpractice on their part,” Cuomo said, noting that the state’s mandate would be effective immediately. Elective surgeries must be halted in Erie County as of Friday. Other parts of the state will be required to cancel elective surgeries if cases continue to get worse.

Governors in states like North Dakota and Illinois have been warning about overburdened hospitals and limited beds for weeks. Hospitals in Utah say they are already informally rationing care, although no one has been ejected from ICUs yet.

Overall, patients who are hospitalized with COVID are reportedly surviving at higher rates than in the spring and summer, per STAT News. Many patients are younger, and effective treatments are being used more frequently.

The CDC says that four national forecasts, including Johns Hopkins’ applied physics lab, predict a likely increase in new hospitalizations per day over the next four weeks.

Merriam-Webster on Monday announced “pandemic” as its 2020 word of the year. Pandemic, with roots in Latin and Greek, is a combination of “pan,” for all, and “demos,” for people or population. The latter is the same root of “democracy,” Sokolowski noted. The word pandemic dates to the mid-1600s, used broadly for “universal” and more specifically to disease in a medical text in the 1660s, he said. That was after the plagues of the Middle Ages.

Moderna submitted their vaccine to the FDA for Emergency Use Authorization.

Pfizer is shipping their vaccines now all over the world.

Gov. Baker of Massachusetts said the state is not planning any additional shutdowns or restrictions at this time. “Massachusetts Governor Charlie Baker said Tuesday that despite rumors to the contrary, the state has no plans to further curtail the activity of residents to limit the spread of COVID as winter approaches. ‘There’s … been a lot of misinformation going around about things that are going to get shut down here, there, everywhere, at a moment’s notice,’ Baker said. ‘People have enough stress in their lives without having to deal with the rumor mongering.’”

Vaccine – A new poll of Massachusetts residents found that more than one-third of respondents are reluctant to take the injections.

The CDC is strongly urging people not to travel for the holidays. If you must, they recommend testing 1-3 days before and 3-5 days after travel.

Governor Raimondo is a keynote speaker at Dreamforce to you 2020 – a meeting of Salesforce – Success to You: