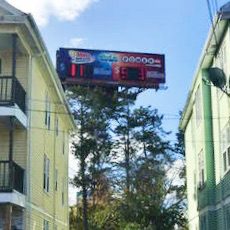 With a new City Council and Mayor about to take office, there are efforts afoot to allow Lamar Advertising to electrify one of its billboards along Route 95

On Monday, Nov. 7, Linda Perri, community advocate representing Washington Park, and vigilant watchperson for attempts to increase the burden of pollution in her neighborhood, including visual pollution from electrified billboards, wrote to ConvergenceRI to issue an alert about a pending item on the Providence City Counciil agenda, scheduled for the Thursday, Nov. 17 meeting.

It seems that Lamar Advertising is pushing ahead with plans to electrify one of its billboards, after being stalled in the Ordinance Committee for three years.

Perri sent a photograph, taken by her with her iPhone, to show that the claim that the billboard in question would not be anywhere near residents was not accurate.

In a letter sent to all city council members, Mayor Jorge Elorza, the city council president, legal advisors to the council, Perri challenged the claim that Lamar’s sign, located at the corner of Elmwood Avenue and Cadillac Drive, would be “oriented away from residents.”

South Providence, of course, is a neighborhood that has borne the brunt of air pollution from Route 95 as well as from the fossil fuel infrastructure and storage facilities along Allens Avenue.

While the city’s Innovation District celebrated the new planned construction for a state public health laboratory as part of a 212,000-square-foot commercial development next door to the Wexford building, and Susan Collins, the new president and CEO of the Boston Fed, receently visited Providence, the residents of South Providence neighborhoods keep trying to be beard above the din of corporate public relations. Stay tuned.

The questions that need to be asked

Which current City Council members will stand up for South Providence residents? Why are there no tourist brochures hyping Providence’s two largest exports – scrap metal and sexually transmitted diseases? What are the latest asthma statistics for children in South Providence?

To read more articles in RINewsToday by Richard Asinof, go to: https://rinewstoday.com/richard-asinof/